Turkey vs Peacock – What is the Difference?

Learn Poultry » Peafowl » Turkey vs Peacock – What is the Difference?

Turkey and peacocks are both land-dwelling birds that have been historically raised for their meat, eggs or feathers. They’re often compared to each other due to their large size. 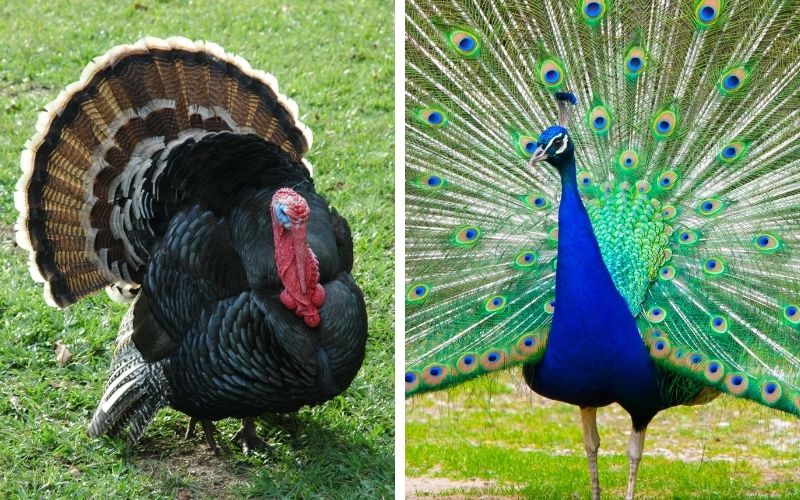 As they’re both heavy-bodied birds that enjoy foraging the ground for food, they show some similarities in their appearance.

But the similarities mostly stop here.

Despite their similarities, these birds are not genetically related. They’re completely different species that would not be able to interbreed.

In what follows, I will point out the differences between a turkey and a peacock, showing you how these apparently similar birds are not that similar at all.

What is a Turkey?

A ground-feeding bird that’s in the Meleagris genus, turkeys are native to North America.

Even though domesticated turkeys might be raised together in the same enclosure with Indian peafowls, these two birds would not meet in the wild as they live in different parts of the world.

The two extant species of turkeys in North America are the wild turkey and the ocellated turkey that can be found in the Yucatan Peninsula. They share a common ancestor with pheasants, grouses, and other fowls.

These birds can be found in forest floors, grasslands, and swamps, but they prefer a habitat of mixed conifer hardwoods, pastures, or fields.

Wild turkeys have an aggressive streak, so it’s not advised to approach them in the wild. Males of the species are larger and have more colorful plumage.

What is a Peacock?

There are three species of peafowl in the world – the Indian peafowl, the Congo peafowl, and the Green peafowl.

The term ‘peacock’ refers to the male of the species, which is notable for its exuberant plumage and large tail feathers that open in the shape of a fan. Females of the species are called ‘peahens’.

As forest birds, peafowls nest on the ground and roost in the trees to protect themselves from predators, of which they have plenty.

Like turkeys, they’re land-dwelling birds that enjoy foraging and scavenging for food. Despite leading a predominantly terrestrial life, peafowls can take flight when needed.

They usually fly to roost in trees or to escape predators. Despite the 5-6 feet long train, peacocks can take flight by launching themselves into the air.

The Indian peacock is the most numerous and common species of peafowl in the world, and arguably the most impressive when it comes to plumage colors.

Let’s see how a turkey is different from a peacock, and why the lives of these two species of birds can sometimes become intertwined, despite the major differences between them.

If you know turkeys and you know peacocks, you’re probably wondering why would anyone mistake the two for each other?

But there are some similarities like the iridescent plumage, the heavy body, and the fan-shaped tail feather.

Peacocks, however, have much more color in their plumage – the Indian peacock has a metallic blue chest and scaly bronze-green feathers with black and copper markings on the back.

Also, peacocks have a fan-shape crest on their heads made of blue-green feathers on black thin shafts.

Turkeys have a red, featherless head with a red throat, and red wattles on their throat and neck.

The head also has caruncles, which are fleshy growths that give the head a rugged appearance. There’s also a fleshy flap on the bill, which is called a snood.

Peacocks bear the most resemblance to ocellated turkeys that are native to the Yucatan Peninsula.

These turkeys have colorful plumage that have made some people wrongly assume that these birds are a peacock-turkey hybrid. But they’re not. Nor is it possible for these two species of birds to inter-breed.

They can, however, mate with each other. This happens when they’re kept in the same enclosure and peacocks have no peahens to mate with. But mating between the two species does not produce any offspring.

Different species of peafowl have different temperaments. The Indian peafowl is the most docile of all the peafowl species. It’s also the reason why it can be kept in the same enclosure with other types of poultry.

The Congo peafowl and the Green peafowl are both aggressive and prefer forest habitats away from the presence of humans.

Wild turkeys are also aggressive when provoked or frightened, so it’s best to keep your distance.

Interestingly, turkeys have a good relationship with other wild animals like deer and squirrels and are often seen foraging together and helping each other to watch out for predators.

Both peacock and male turkeys spread out their tail feathers as part of the courtship ritual. They also both use loud vocalizations as a way to attract mates but also to warn others of the presence of predators.

None of these birds are known for their egg production. Peahens produce very few eggs per year. In the wild, they usually lay a clutch of 4-8 eggs.

Turkey hens aren’t much better either. They usually lay a clutch of 10-14 eggs, with one egg per day. This means it can take a full two weeks for a turkey hen to lay the eggs of a clutch.

Wild turkeys that are raised in captivity can also be stimulated to lay more eggs by taking their eggs away daily. With this ‘trick’, wild turkey hens can lay up to 100 eggs a year.

In both cases, the incubation period lasts for 28 days.

I’ve already mentioned that it’s possible that one of the reasons why peacocks have fallen out of favor as a source of meat is that there are meatier alternatives like turkeys, for example.

When it comes to meat production, turkeys are the favorite poultry of the two. In some areas of the world, peacocks are still raised for meat production, but they’re mostly eaten as a delicacy.

In turn, turkey meat is much more common around the world – it is simply easier to source and costs less.

It’s also perhaps a matter of taste. Domesticated turkey tastes a lot more like chicken than peacock meat, which has a more gamey flavor that not everyone likes.

Peafowls are an omnivorous species; they eat most things that are available to them and what they can find by foraging including grasses, seeds, grains, berries, insects, small rodents, lizards, and other bugs and insects.

Turkeys are also omnivores. They spend their time foraging on the ground but they also climb shrubs and small trees.

But they also eat insects and the occasional small salamander, lizard, and snake. They also visit croplands and scavenge the grains after harvest.

Of the peafowl species in the wild, the Indian peafowl is most suitable for being raised in captivity. They have a more even temperament and can also get along with other birds.

But being the large-bodied birds that they are, peafowls need ample space to roam freely. They also need a roosting area.

When raised in areas with cold winters, they need a warm and dry coop to protect against the elements, but also against predators.

In summer, they also need a cover under which they can seek refuge from the strong rays of the sun. They can be raised in a covered or uncovered enclosure, but they need a high enough fence to keep them from flying away.

Turkeys are a hardier species than chickens, for example, and prefer to be kept outdoors. They also need a cover, high fences, access to range grass, a roosting area, protection from predators and dust-bathing areas.

Some of the needs and behaviors of peacocks and turkeys are similar. They also show a few similar physical features – large body, iridescent plumage, and fan-shape tail feathers – but these are not similar enough to mistake these birds for each other. 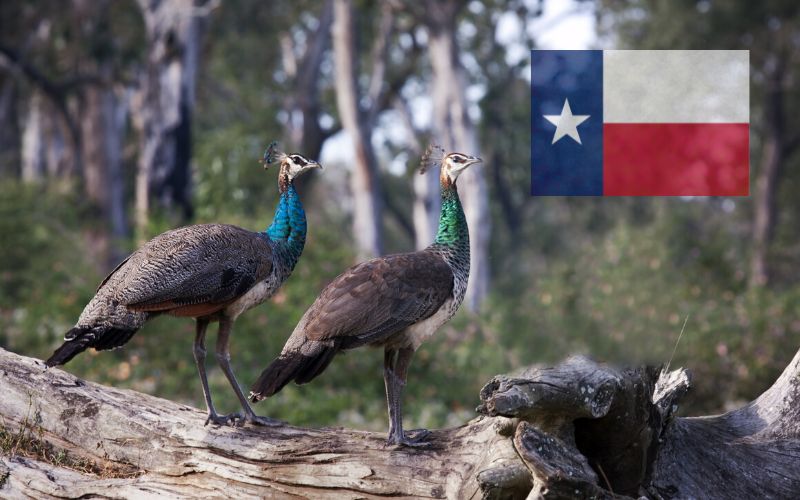 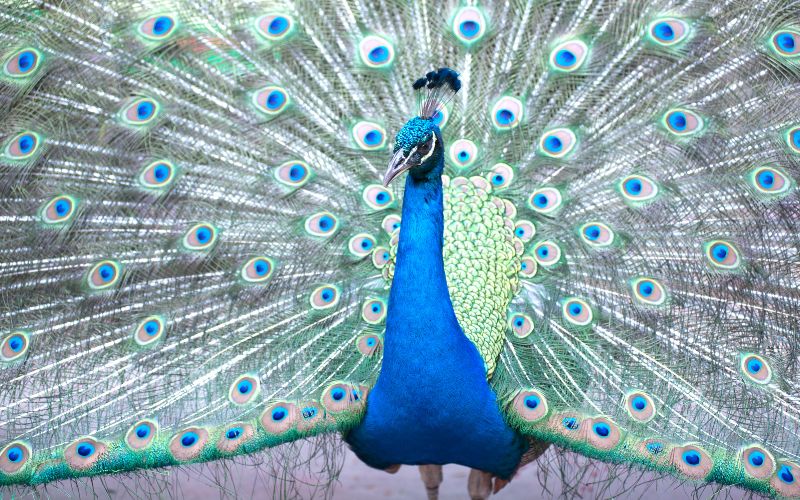 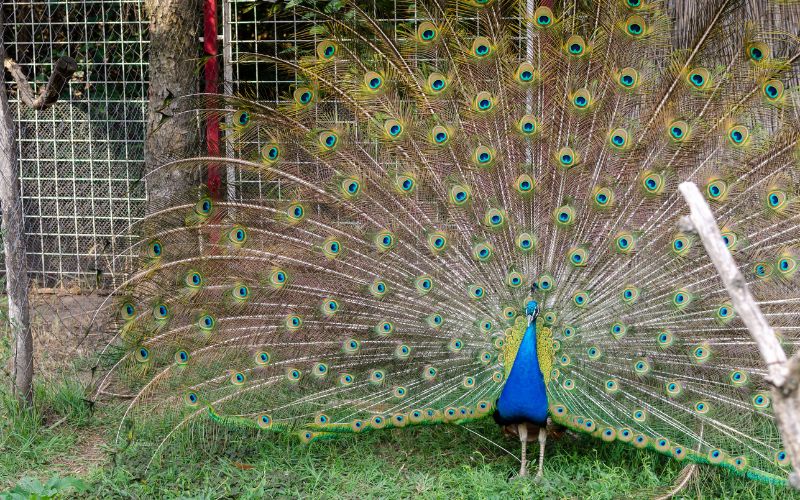 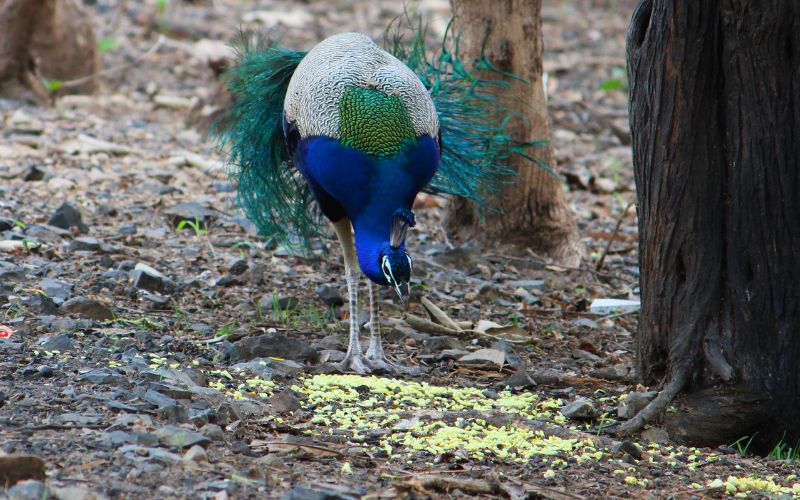