Blue chickens are a true marvel and a sight to behold. No wonder the popularity of these birds keeps soaring each year. These chickens look majestic, especially when sunlight hits their remarkable feathers. Blue chickens are attractive birds to add to any backyard flock, thanks to their mesmerizing beauty.

These are the ten popular chicken breeds to raise if you consider adding gorgeous colored fowl to your flock. Blue Cochin chickens are attractive birds, thanks to their heavy, soft, fluffy feathers. They have an elegant and eye-catching blue plumage. These chickens have feathered feet and legs.

Their heavy feathering makes them look bigger than their actual size. However, full-grown Blue Cochins are hefty. Overall, Blue Cochin chickens are large fowl compared to the average breeds.

Females weigh around 8 ½ pounds, while roosters weigh approximately 12 pounds. Blue Cochins have short wings, so these chickens cannot fly. Their large bodies make them poor flyers and an easy target for predators.

Blue Cochins have a calm temperament, making them extraordinary chickens to raise as bird pets for kids. Blue Cochins aren’t reliable layers, although hens lay between 80 and 100 eggs yearly.

They stop laying when they are around three years old. Although most people keep them for aesthetics, they can be decent meat producers because of their hefty bodies.

Blue Cochins are healthy chickens that live for around a decade. 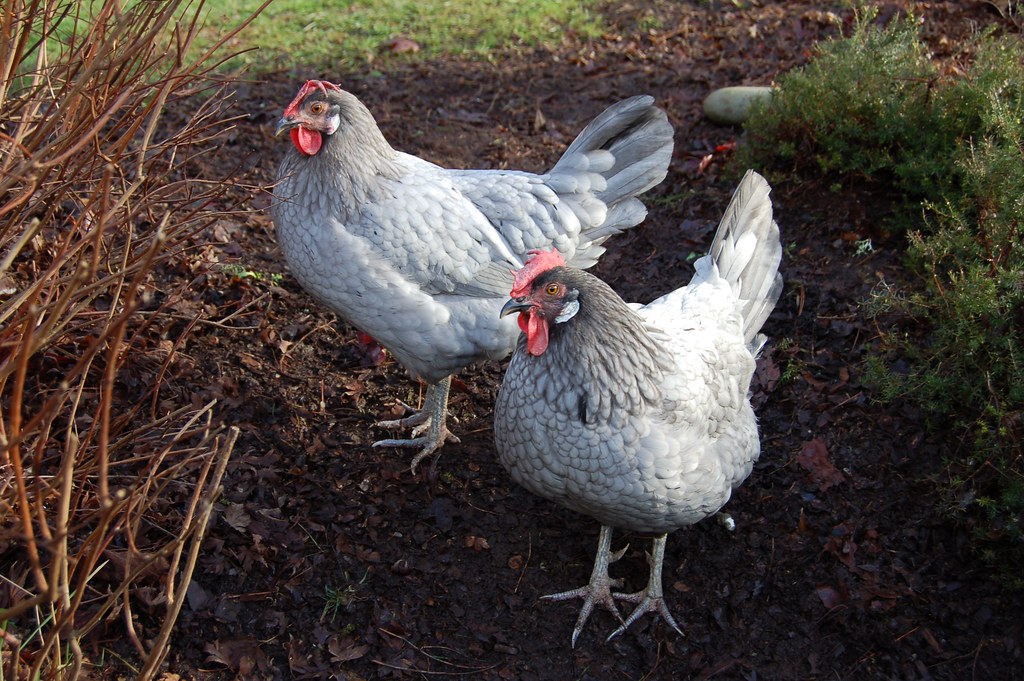 Blue Andalusian chickens are attractive, graceful, and elegant medium-sized birds from Spanish ancestry. The chickens have blue-grey plumage with blue feathers and lacings.

Blue Andalusian chickens have white earlobes and medium-sized single combs. They have a slim and sleek appearance. These chickens’ bodies are long, although they aren’t overly muscular.

Blue Andalusian hens weigh approximately five pounds, while cockerels weigh around seven pounds. Blue Andalusian chickens are friendly and inquisitive chickens. These curious birds will always be around to see what you are up to.

However, Blue Andalusians don’t like human handling, and they also don’t enjoy cuddling like most colored birds. These birds are dependable layers because hens will lay around 150 to 165 eggs yearly.

These chickens live for between five and eight years. This is a stunningly elegant breed with tremendous grace and purpose. Blue Brahmas have pea combs.

Their blue plumage is tight and dense. They have long, wide and deep bodies. They stand upright like other Brahma chicken varieties, which gives them a V-shaped appearance. These chickens have feathered feet, giving them an adorably cuddly look. Blue Brahmas are large birds.

They seem intimidating to kids and chickens. However, these chickens are gentle and non-aggressive. These easy-going, calm, friendly, and docile chickens are easy to handle.

Blue Brahma hens lay 3 to 4 medium to large-sized eggs weekly. However, hens can take a long time before they start laying. Blue Brahma chickens are fantastic meat producers because of their massive weight and size.

They have a lifespan of over eight years. 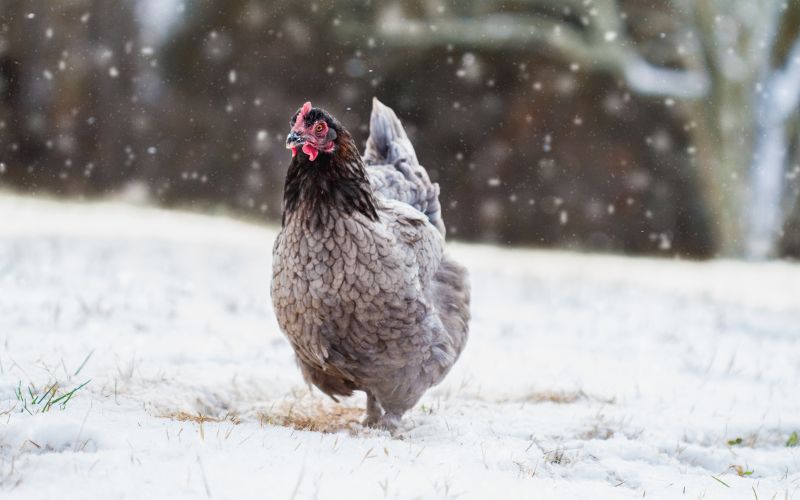 Blue Copper Marans are beautiful and rare blue chickens. These chickens are recognizable from their beautiful copper hackles and blue feathers.

Most of these chickens have light feathers, feet, and shanks. Blue Copper are medium-sized to large birds. Cocks weigh around eight lb., and females weigh approximately 6.5 lb.

These hardy winter chickens have a docile temperament. Blue Copper Marans are athletic and are fond of free-ranging and foraging. Because these chickens are friendly, they can also do well in confinement.

They also do well in mixed-breed flocks. The average lifespan of Blue Copper Marans is approximately eight years. 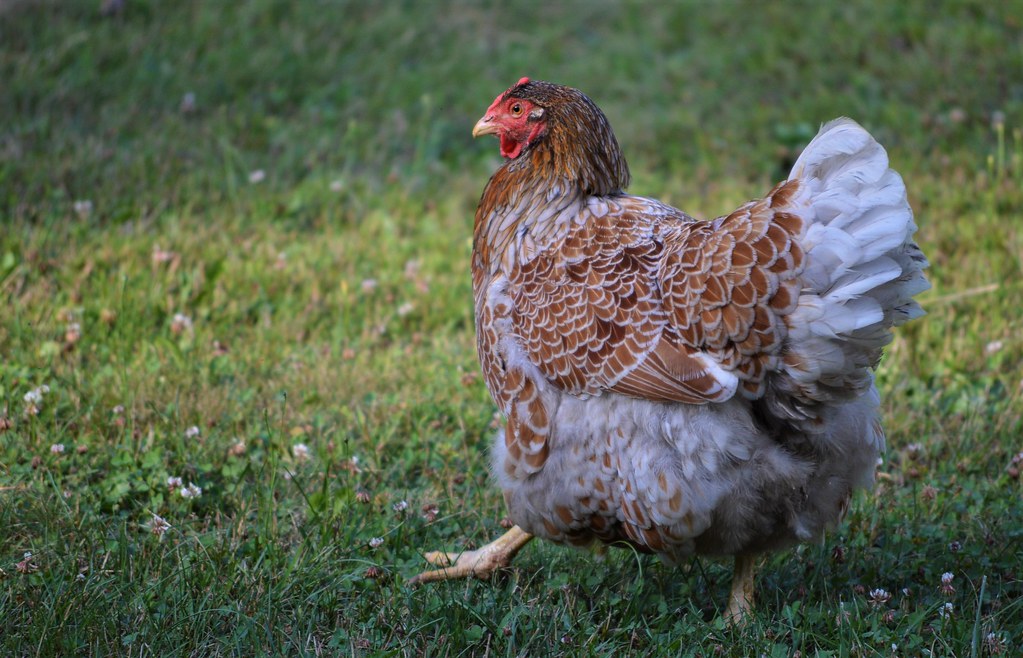 These chickens have blue-laced red patterns and red bay eyes. Blue Laced Red Wyandottes have dense feathering from their underbellies to the tails. They have round bodies and red wattles, and short legs.

Blue Laced Red Wyandotte is a dual-purpose fowl you can raise for meat. They are exceedingly friendly chickens. These easy-going birds are excellent for homesteads and farms.

They live around five years, although some Blue Laced Red Wyandottes can live longer under good conditions. 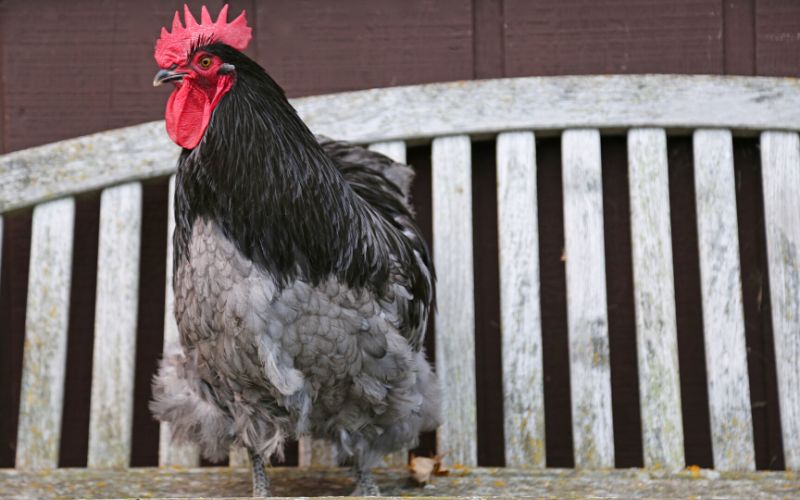 Blue Orpington chickens are some of the most famous blue chickens, thanks to their blue plumage and dark lacings.

They have long, broad bodies with low stances. Their fluffed-out feathers and curvy short backs make them delightful fowl to watch.

Blue Orpington chickens are well-feathered birds and have smooth and broad feathers. They have pinkish-white and clean feet and shanks. Blue Orpington roosters weigh around ten pounds, while hens weigh approximately eight pounds.

Besides being notably good-looking, these chickens have a calm, friendly and sweet disposition. Blue Orpington hens are proficient layers because they can lay around 250 eggs annually.

They can also produce a reasonable amount of meat, making the blue-colored chickens wonderful table birds. Blue Orpington chickens can live for over seven years with good care. Blue Plymouth Rock chickens are famous chickens that are a cross between Plymouth Barred Rocks and Andalusian chickens.

These chickens have lavender-blue feathers, with roosters having white dots on their wings and heads. Female chicks have rings of gray or gold feathers around their necklines.

Blue Plymouth Rocks are lightweight chickens, with cocks weighing five lb. and females weighing 4.4 lb. They are some of the best blue chickens to keep for egg production. Blue Plymouth Rock hens can lay around 300 large brown eggs annually.

Blue Plymouth Rocks are sweet, docile, and calm. These chickens are curious, and they always check the surrounding environment.

While these chickens do well in confinement, they remain happier when free-ranging. Blue Silkie is a rare blue chicken breed that belongs to the Silkie family of chickens. These chickens have blue feathers with white tips along their wings.

Some Blue Silkie chickens have white spots on their necks. Their legs, bones, beaks, and skins are all black. These chickens have muffs and beards. You can distinguish them from other Silkies because of the crested fluffs on their heads.

Blue Silkies are smaller because males weigh only 1.8 kg and females weigh 1.4 kg. They are docile, friendly, and calm. Blue Silkie chickens are ornamental birds, and they are inferior layers.

These chickens can live for around ten years. 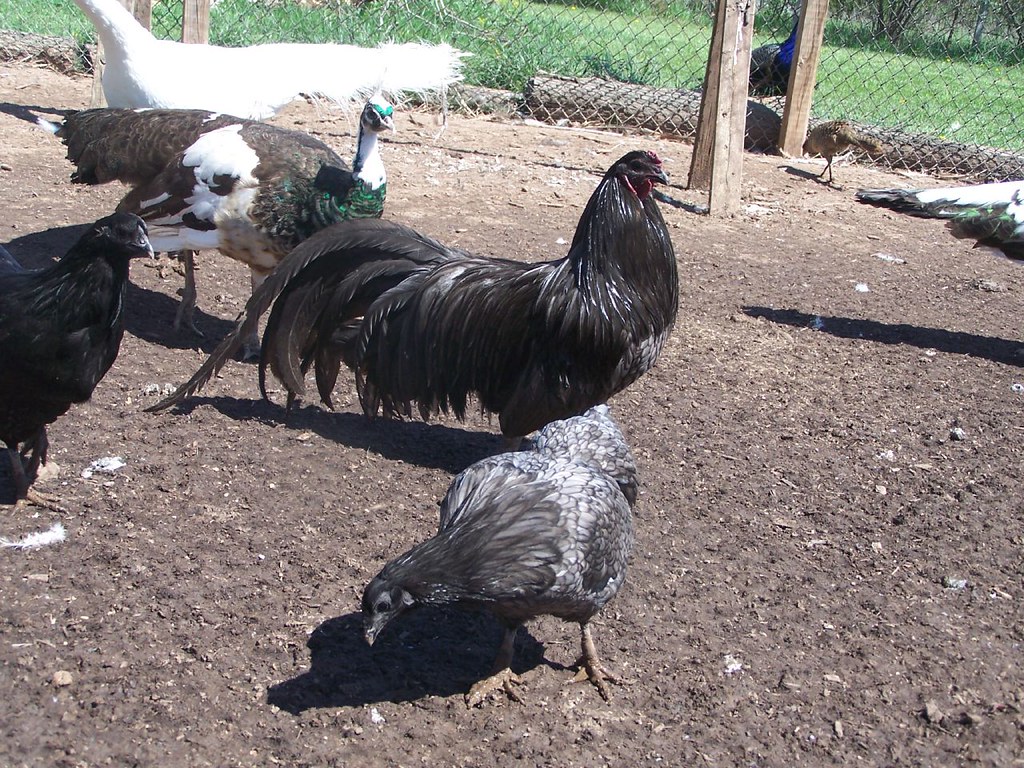 Furthermore, these chickens are infamous for laying small-sized eggs. These birds are excellent to raise as ornamental chickens. They also don’t do well as meat-producing chickens. 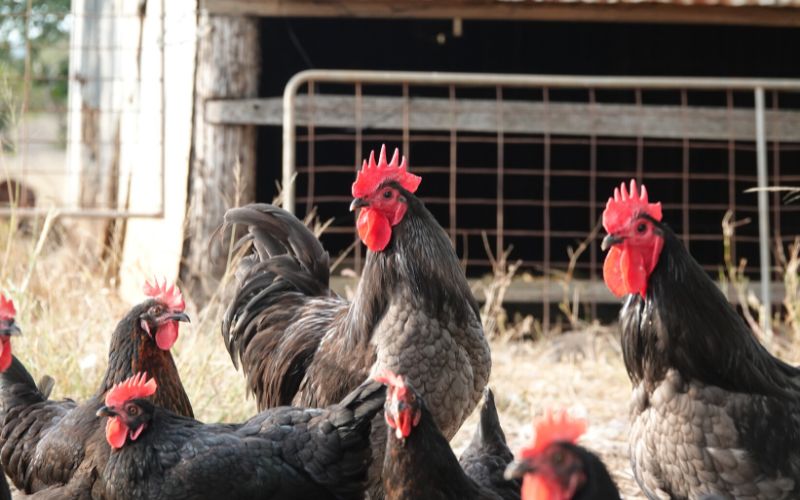 Blue Australorp chickens have a unique and stunning coloration. These chickens are entirely blue and have white and blue tips on their wings tips.

Their chest and abdomen also have a blue coloration with white spots. Blue Australorps have single combs. They have black and white legs and feet.

Blue Australorp chickens are laying machines because they can lay over 360 eggs annually. The large size of Blue Australorp makes the birds outstanding meat producers.

They also make lovely egg and meat producers. Blue chickens are also beautiful. Most blue breeds can adapt well to all conditions. 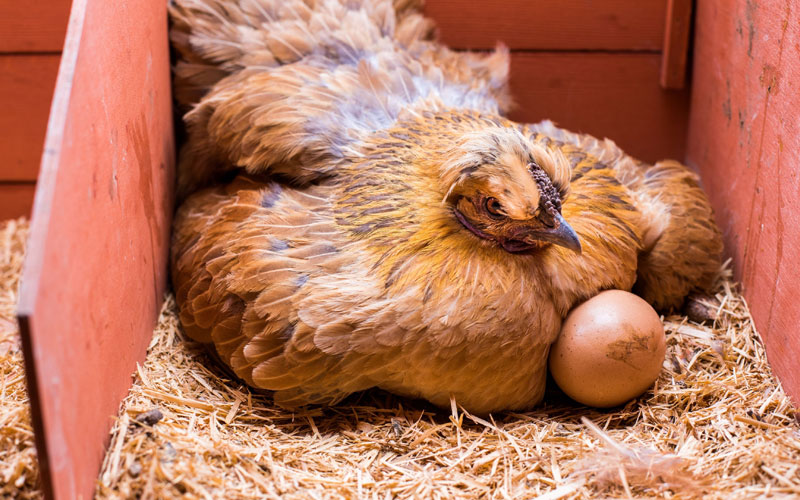 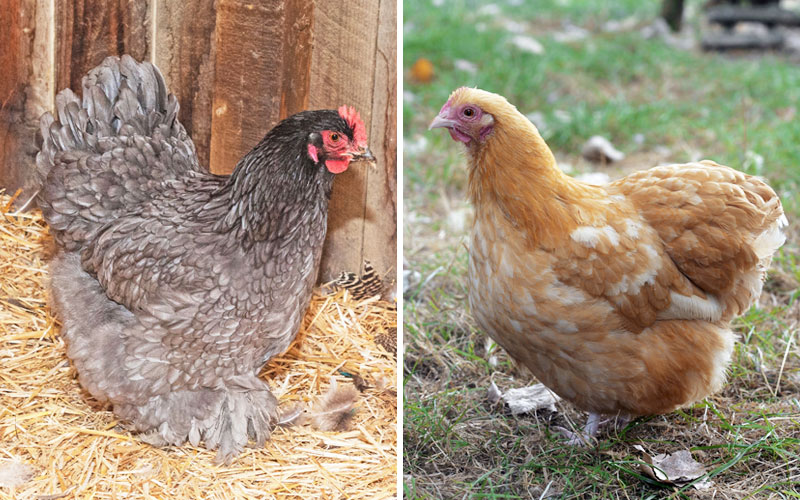 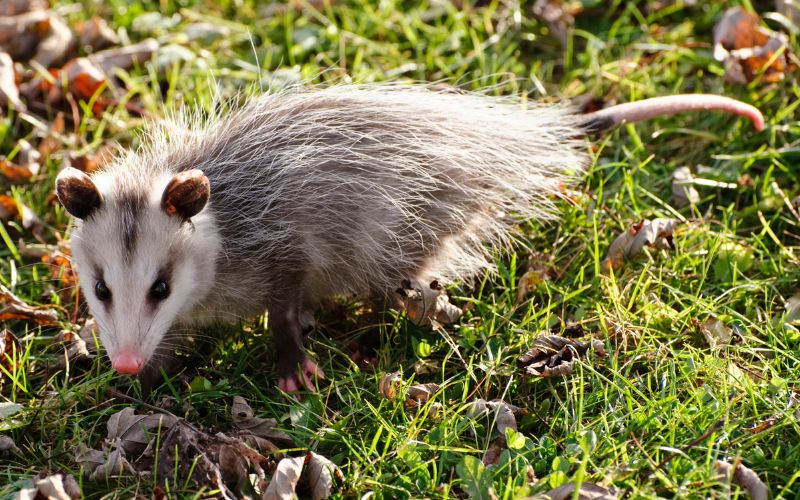 What Are Baby Chickens Called?