Muscovy duck is a strange-looking bird with a warty face. This is a reason why bird watchers are still confused about it. This bird is very distinctive in its own way. Yet it does not feature in some field guides. 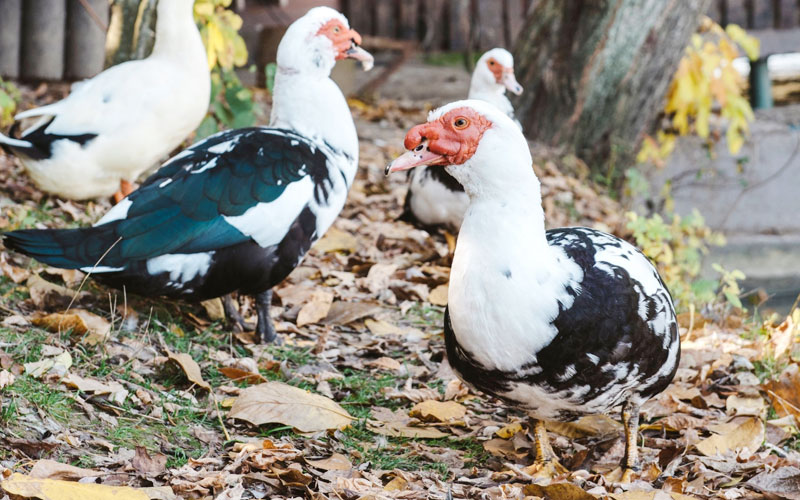 Wild Muscovy ducks are restricted in places like south Texas and most parts of Central and South America. The domesticated ones are mainly found on farms and in parks across many parts of North America.

Unlike the domesticated Muscovy ducks, the wild versions are usually glossy black with several bold white wing patches. Plus, these wild Muscovy ducks are mainly forest dwellers. They usually nest in tree cavities of their natural habitat.

Muscovy ducks are among hardy birds. No wonder several species are still roaming the wild South American jungles today. Several states in North America such as  Georgia and Florida have wild Muscovies as well. These birds play a critical role in balancing the ecosystem since they eat millions of pests including mosquitoes each year.

Muscovy ducks are available in several beautiful colors. The most dominant ones are the white Muscovies, followed by the Pied or half white and half black colored feathered ones.

Others have brown, buff, lilac, blue, and chocolate feathers. Other color combinations are found among Muscovy ducks. Dark-colored muscovies have brown eyes while whites, blues, and lilacs have grey-colored eyes.

Just like most ducks, muscovies come with a crest-like feature on their heads. During the mating time, male muscovies often raise their crests to keep off potential male rivals.

They also raise the crests when claiming dominance or trying to impress the females. Muscovies wag the tail when communicating with one another. Alternatively,  they raise or lower their heads as a sign of communication among themselves.

Here is everything you need to know about Muscovy ducks:

Muscovies are native to Mexico, South and Central America. Wild muscovies live in the lower parts of Rio Grande. Some are found in several locations within Texas.

Some species of Muscovy ducks have also been domesticated, especially those that adapt well to colder climatic conditions. Federal populations of muscovies are currently found in some parts of Europe, Canada, and North America.

The wild Muscovy duck (known scientifically as Cairina moschata sylvestris) is popularly called Forest Duck or Greater Wood Duck. Before Christopher Columbus arrived in the Americas, the indigenous people domesticated and even bred a variety of muscovies. The Spanish named the wild Muscovies pato real and the domesticated ones pato criollo.

Even though the Muscovy is often referred to as a duck, it is not real a duck despite bearing a close resemblance to several duck species. Instead, it is close to the goose family. It also grazes just like a goose. The Muscovy duck is not bred from Mallard stock.

When it comes to the habitat, Muscovies prefer forest areas bearing water bodies. This habitat is perfect for them because they create their nests in tree cavities and roost high up in trees. They also love cooling themselves in water during hot summers.

In general, their habitat regions include temperate and terrestrial. Their terrestrial biomes are mainly the forest and aquatic biomes include ponds, lakes, streams, and rivers. Muscovy ducks are also fond of wetlands such as marshy areas, swampy places, and bogs. Other habitat features may include riparian land. 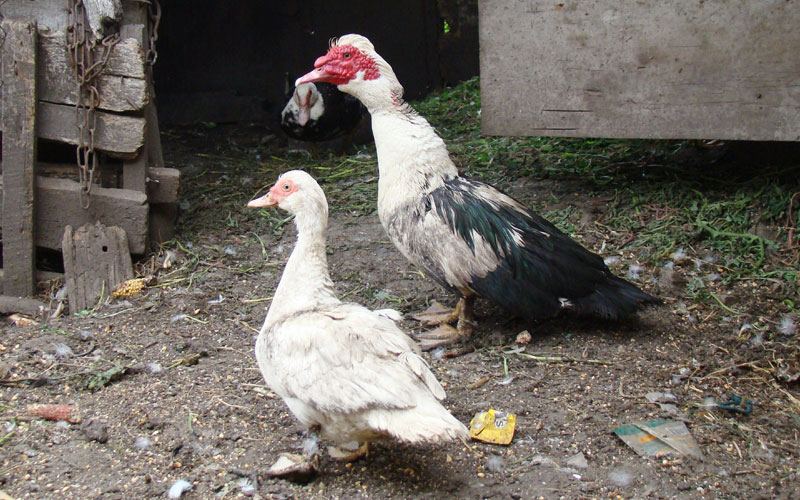 Muscovy duck is a unique domesticated duck that is not related to Mallard duck. Even though it is native to Mexico, South and Central America, this duck is available throughout the world. As a matter of fact, it is not a true duck despite being called a duck. It is just a close cousin to ducks a completely different waterfowl species referred to as Cairina moschata.

Muscovies are also known by other names like Musk duck, Barbary duck, Musco ducks, and Musky duck. They are raised for their delicious meat and eggs with some kept as pets and exhibition birds.

Below are their characteristics:

Muscovies are large and heavy-bodied with long necks that make them resemble small geese. Typically, they have fairly long bills that slightly slope up to their foreheads. The tails are long compared to other types of ducks. Drakes (male ducks) are larger than females. By comparison, the domesticated muscovies are larger than the wild varieties.

On average, a Muscovy duck can have a wingspan measuring up to 162.56cm (64 inches). Drakes may have a body length of about 34 inches while the ducks can have an average length of (26 inches) for the domesticated ones.

Muscovies are social birds. They even go the extra mile to establish a social order or hierarchy. Dominant drakes protect tier territories by simply dominating other male Muscovy ducks. They achieve this feat by using visual displays such as raising their crests.

Dominant males have the responsibility of maintaining their respective territories and mating with females. Other males living in that territory only act as bachelors. Muscovies are non-migratory birds. They usually stay active during the daytime.

In general, Muscovy ducks are unique, gentle, and quiet birds. Ducks show aggressive behavior when they are brooding and are known to make a quiet trilling coo. Males, however, are not as noisy as other ducks. They also don’t quack but make breath calls or low hissing sounds.

Muscovy ducks are friendly to even small kids. Once they get used to you, muscovies will always come closer while wagging their tails just in the same way friendly dogs do.

Muscovy ducks lay very delicious eggs. Their eggs are used in quite a number of dishes prepared by famous cooks or individuals. Many people consider them a delicacy. These eggs contain larger quantities of albumin than chicken eggs. That makes them ideal for fluffier pastries.

On average, a female Muscovy duck lays 8 to 10 eggs per laying season. In one year a Muscovy duck can lay between 60 and 120 eggs. This number of eggs should tell you that their egg productivity is low. The eggs are white in color, large in size, and weigh between 65 grams and 85 grams (0.14lbs and 0.18lbs).

Apart from eggs, muscovies have been bred and raised for meat for hundreds of years. Their meat yield is considered the highest of any duck. In addition to that, the meat is about 98% fat-free with around 50% more breast meat than what is found in standard ducks. The meat is also less greasy with fewer calories than that for other ducks and turkey.

Muscovy duck has a strong flavor that varies from one duck to another. Variations in the flavor come about as a result of nutrient content and diet fed to these birds. The meat tastes more or less the same as veal, ham, or roast beef.

Below are basic requirements for raising muscovies in your backyard:

Muscovies are relatively affordable in terms of feeding and nutrition. Most of them enjoy feeding themselves when roaming the field or yard. They enjoy eating insect larvae, clover, bugs, worms, slugs, and mice.

Provide them with an abundance of grit to help in their digestive system. You may as well provide them whole seeds, weeds, and grass from the surrounding area, especially when they are cooped. Extra greens such as chopped lettuce, chopped, fresh vegetables, and corn can help supplement their dietary needs.

Even though Muscovy ducks are not as wild about water as most mallard-derived duck breeds, they still need a considerable amount of fresh, clean water regularly. They will also feel comfortable in a pond or a kiddie pool if you provide one for them.

Muscovy ducks prefer to perch when inside their shelters. This means that you should consider erecting a sturdy coop with roosts that can accommodate the number of ducts under your care. Their nesting boxes need also to be placed in places that they can easily access. The ideal nesting boxes should be 2 feet high and 18 inches in length and width

Security of your Muscovy ducks should be a priority. So, the coop should provide good protection against predators during the night or when they are roaring the backyard. Having a safe space for your muscovies will certainly give you peace of mind as you go about your business.

Below is a list of health problems associated with Muscovy ducks:

Make sure to notify your local veterinarian as soon as you notice any of the above-mentioned signs and symptoms.

Yes! Muscovy ducks are excellent flying birds. Keep in mind that they prefer roosting high in the trees, so their flying skills are exceptionally good. In fact, they portray a goose-like flight (with a straight neck) and they can be spotted flying at dusk and dawn.

How Much do Muscovy Ducks Cost?

The cost of  Muscovy ducks depends largely on the size, sex, age, and color. Adults can vary from $10 to $15 for drakes and $15 to $25 for ducks. A pair can fetch between $50 and $75 depending on the quality and color of feathers.

Not at all! The fact that Muscovy ducks are linked to the geese and not ducks should tell that they are not loud. These birds only quack. That is why many people like them for their quiet nature. Drakes make the hissing sound while the ducks produce the “pip” sound, which is very exotic and almost similar to a flute.

Muscovy ducks are usually quiet with peaceful personalities. They communicate among themselves by wagging their tails furiously, especially when happy or animated much like the dogs. They can tolerate wintery conditions better provided that they have a suitable shelter.

Muscovies rarely migrate to other locations unless the weather conditions around them become too severe to tolerate. These birds love to hunt mosquitoes and flies although they prefer to forage in marshy areas, lagoons, ponds, and other wetlands.

They are domesticated mainly for their meat and eggs. But some people keep them as exhibition birds and backyard pets. Most importantly, they are hardy and easy to look after. 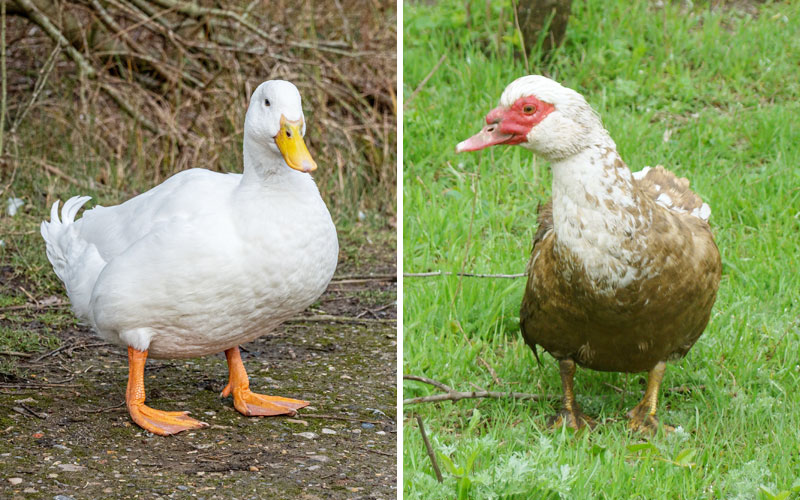 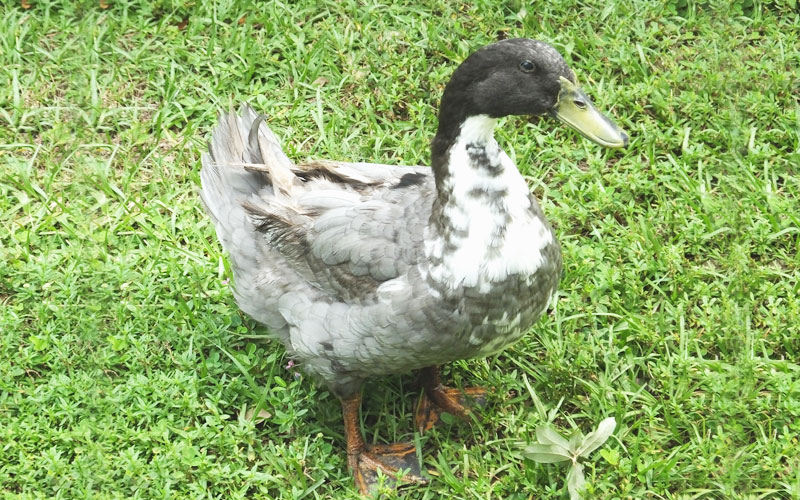