Yes! Muscovy ducks can be aggressive at some point. However, Muscovy Ducks are usually very silent. They only use their vocalization for specific situations and events. Mothers and their ducklings converse in low-frequency calls. Partners interact using hissing sounds. 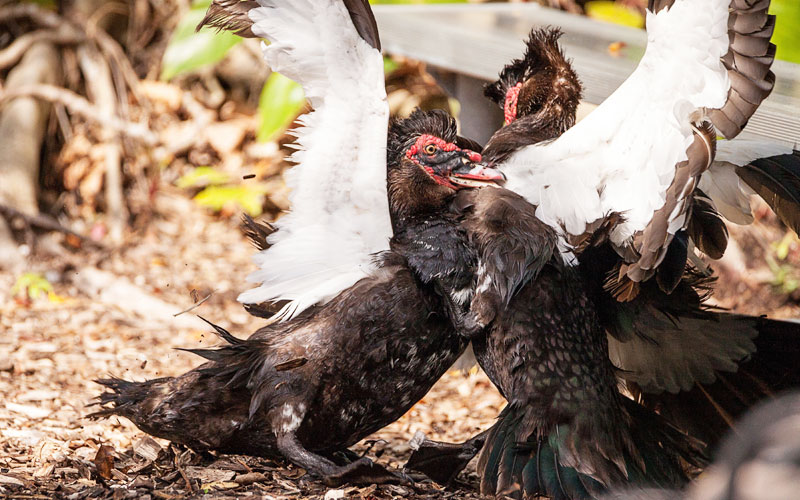 Muscovy ducks’ communication during the mating season entails a series of other noises such as bill clapping or tail wagging. These strange noises are rarely the reason why some homeowners complain about these highly temperamental birds. Their aggressive behavior and sudden attacks are the main reason why some people may view Muscovy ducks differently.

Muscovy ducks are naturally territorial. For that reason, they will fight intruders to retain their territory. They often become hostile towards human beings and pets, especially when they feel threatened. This is why you may often see your Muscovy ducks freezing and calling out in alarm.

Muscovy ducks’ aggressive behavior is not uncommon and as benign as it is always thought. Typically, these ducks use their wings, beaks, and claws to keep away intruders. The commotion of these angry, protective ducks is somehow disorienting and frightening.

Here are the top five reasons why your Muscovy ducks may act aggressively:

– Muscovy Ducks Become Aggressive When they Want to Dominate

In most cases, Muscovy ducks display aggressive behavior whenever they want to dominate others. This is usually the case with drakes (male ducks). Dominance is a normal trait among male ducks and the main reason for their aggression towards other birds.

Drakes always want to feel they are the boss not only to other ducks but also to the rest of other animals including humans. So, they will resort to being aggressive to stay at the top and in control.

– Muscovy Ducks Become Aggressive When they are About to Mate

When your Muscovy ducks want to mate, they become very aggressive towards other animals. Drakes are the ones that display this aggressive behavior to keep away other potential male competitors.

In the process, they fight off anything and anyone who tries to invade their territory. Some will use aggression as a way to signal their mating time.

In absence of female Muscovy ducks, some male ones can turn to human beings in an attempt to vent their excessive sexual urges. In such incidents, their actions often look as if they are attacking their victims.

Try to think how social life for most poultry birds works and compare it with that of the Muscovy ducks. These types of ducks have a pecking order that is similar to any other bird. They create their own hierarchy just in the same way human beings and other higher animals do.

Muscovy ducks’ pecking order is established through fights to ensure that each duck has its own place in the order.

Some of these fights can be small skirmishes or full-blown, bloody battles. Both males and females take part in these fights but the males’ ones can be more serious than the females’. Drakes go as far as extending such fights to other animals.

They perceive you as part of the social hierarchy or pecking order. So, they may try to challenge you in the processing of creating their own hierarchy within your farm or backyard.

When female ducks are taking care of their young ones, they can do anything to keep them safe. Female Muscovy ducks will fight anyone who tries to get too close to her ducklings. Her aggressive behavior is similar to maternal instincts whereby a mother can risk anything to keep her young baby out of harm’s way.

The only way to ensure the safety of their duckling is to become aggressive to anyone who tries to touch her ducklings.

It is normal for animals to defend themselves when threatened. This is also true with Muscovy ducks. When these birds see anything that may threaten their safety, they will act quickly to keep themselves safe and avert the same threats.

So, they will most likely become aggressive to anyone whom they perceive to be a threat or dangerous. If need be, they will fight using their beaks, claws, and wings to get rid of a perceived threat.

How do You Stop Muscovy Ducks from Fighting?

Native to South America, Muscovy ducks are the only breed of ducks raised in captivity that are not related to wild Mallard. Muscovy ducks can suddenly become aggressive, so there is a need to address the problem as soon as possible. Here are important steps to take to prevent your Muscovy ducks from fighting:

Separate your Muscovy ducks from the rest of the other ducks. You need to take this decision only if your ducks are already showing some aggression towards other breeds. After separating them, make sure to provide each duck with a spacious, well-protected area of its own. Bear in mind that Muscovy ducks are social birds, so pay particular attention to the drakes.

Consider training your Muscovy ducks to get used to humans. This step is recommended if the aggression of your ducks targets humans. For instance, you can hold the aggressive duck’s beak shut and firmly say, “No”. If you do this several times, your duck will get used to that sound and refrain from attacking people.

It will take a short time for your ducks to get used to you. They will also realize that you are friendly and not a threat to them.

If you have one Muscovy duck, make sure to provide it with a mate. Lonely ducks may resort to aggression due to suppression from sexual urges. Ducks start to mate at the age of five or six months. This is the right time to provide them with their mates.

Try to discourage aggression as early as possible. Start with baby ducks and progress to the adult ones to prevent worse cases of aggressive behavior as they get older and larger. On average, a male Muscovy duck weighs up to 12 pounds. With this weight, it can easily knock over children and other animals on the farm.

Can Muscovy Ducks Kill Each Other?

Yes! Some Muscovy ducks can cause serious injuries or even death to others. Apart from that, multiple male ducks can kill female ducks through over-mating. Male ducks, however, can also fight each other over the few available female ducks. These types of fights can cause fatal injuries that may result in death for some birds.

Yes, Muscovy ducks are likely to be aggressive towards human beings. In this sense, Muscovy ducks see humans as threats or intruders trying to invade their territories. So, they will attack anyone who tries to approach them.

Will Muscovy Ducks Attack Other Animals?

Yes! If Muscovy ducks attack humans, they can also attack other animals including pets. Keep in mind that these birds are territorial in nature, so they can easily become aggressive towards other animals.

Their aggression is usually due to a perceived threat coming their way. To protect themselves, they will fight back to deter any animal from invading their territory.

Even though Muscovy ducks are always in large flocks, they are typically silent. This behavior should not make you think they are gentle birds. Muscovy ducks can easily turn violent on short notice and attack other animals including humans.

Their aggressive behavior is usually noticed when competing for available space, food, or other resources of importance to them. They are also territorial and can easily become aggressive to your pets and your visitors. 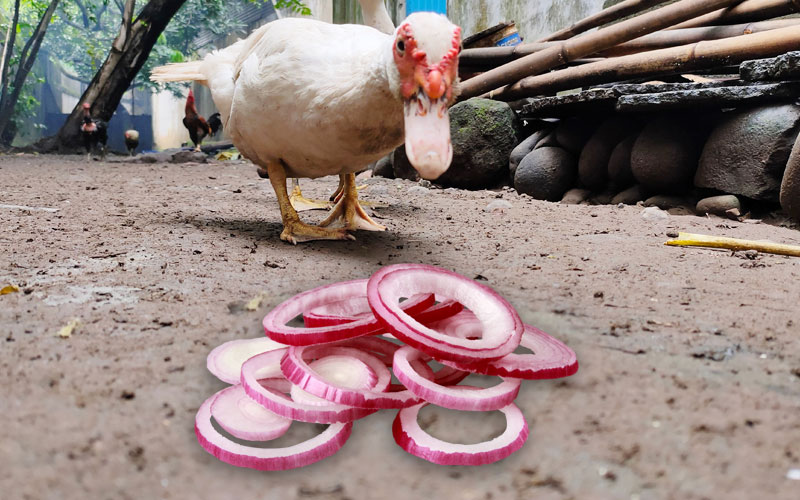 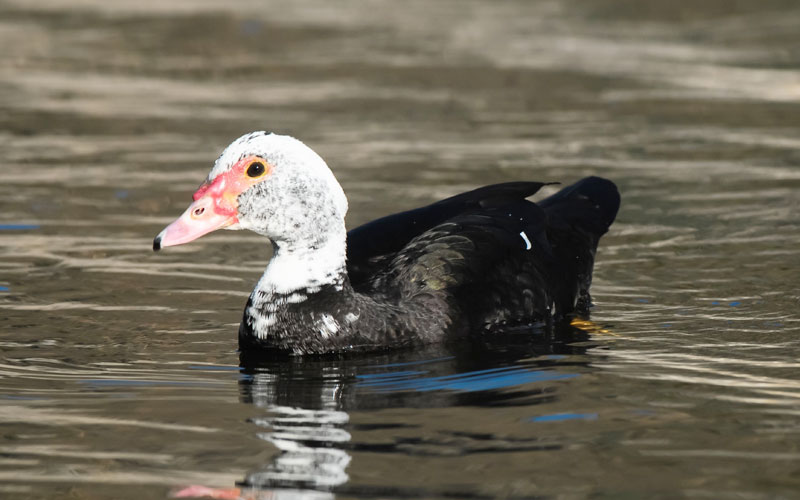