American Buff vs Pilgram Geese – What is the Difference?

Learn Poultry » Geese » American Buff vs Pilgram Geese – What is the Difference?

When some people hear of geese, they immediately envision aggressive animals that they should keep as far away from as possible. However, not all geese breeds are aggressive. Some are very calm and will even become loyal and personable companions when raised from a young age by humans. 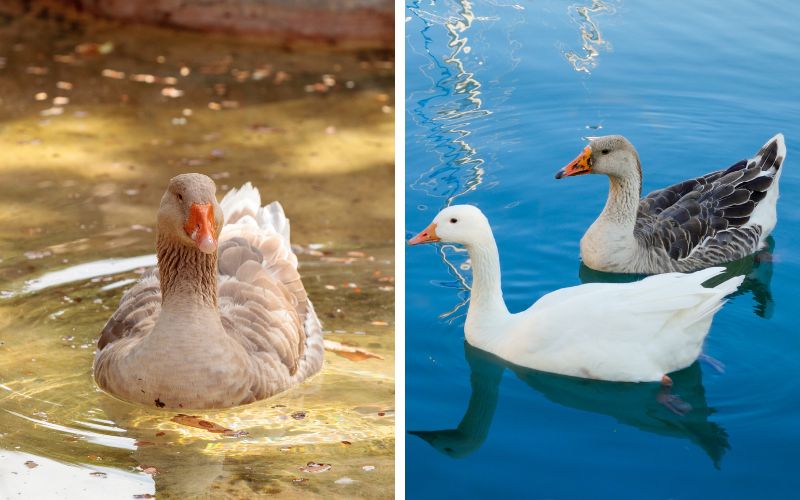 Geese are mostly kept as utilitarian livestock for their meat, fat and down feathers. They can also be used for weed control and as guard animals because they are quite territorial and will keep strangers out of your property.

When choosing your geese, it is prudent to get calm breeds to ease your work when caring for them. American Buff and Pilgrim geese are two of the best choices in this regard. Below are a few facts to guide you on what to expect from these breeds.

What Are American Buff Geese?

The American Buff goose breed descended from the Greylag goose found in the wild in Northern Asia and Europe. The goose is so-named because of its coloration. It is believed the breed was developed from gray geese flocks that underwent a buff mutation or was created from a buff-colored flock from Europe.

American Buff geese are considered extremely rare and close to extinction. This explains why The Livestock Conservancy listed the birds as ”critically endangered. American Buff geese will live for 15-20 years when taken care of well.

What Are Pilgrim Geese?

Pilgrim geese are also known as Australian Settler geese. The species’ exact origin is unclear, but it is believed to have been developed in Iowa by Oscar Grow during the Great Depression and then named ”pilgrim” to honor the pilgrimage of the waterfowl breeder’s family.

Others believe the bird is originally from England, and pilgrims brought it to America, hence its name. Pilgrim geese are unique because they are among the few geese breeds that are sexually dimorphic or auto-sexed. This means that there are obvious distinctions between males and females.

This is one trait that makes them popular ornamental geese. They live for 15-25 years on average. Pilgrim geese are classified as ”threatened” by The Livestock Conservancy.

Though American Buff and Pilgrim geese share a lot of traits, there are also significant differences between these breeds. Here are some of these differences.

Day-old males of the Pilgrim breed have light-colored bills with silver-yellow bodies, while the females have olive-gray bodies and darker bills. Adult geese have soft gray bodies with different amounts of white on their faces and dark brown eyes.

On the other hand, the ganders are primarily white with color traces on their wings and tails and blue eyes. The geese and ganders both have orange-colored legs and bills.

American Buff geese have buff-colored feathers on their sides and backs with creamy white edges. Their abdomens are nearly white, with the bills and feet orange to orange-reddish. The hard nails at the tips of their bills are pale pink.

The eyes of American Buff geese are brown, while their medium-length neck has deeply furrowed feathers. Their legs are fade to pink when there is no green grass in their habitats or during the egg-laying period.

The Pilgrim goose is renowned for its personable and calm character. This makes it perfect for families and beginner poultry farmers. The bird is also fairly quiet, making it ideal for those who live in highly populated areas or within close proximity of their neighbors.

The American Buff is a docile and calm bird, traits that make it a good pet and an ideal option for beginner farmers. Moreover, the goose is tameable and highly intelligent, so you can easily train it.

The Pilgrim goose lays large white 20-50 eggs annually for a few months since no breed will lay eggs throughout. Though the eggs are perfect for eating, most people use them for breeding because they are not so many. American Buff geese will lay 15-25 large eggs annually.

These eggs are also often used for breeding only. They take a month to hatch. American Buff geese are among the broodier breeds. This means that they will raise their young ones well and can even be used to raise the young ones of other less-broody breeds.

Like most poultry, the American Buff and Pilgrim geese are destined for the dining table at some point. With their low egg production, most farmers keep the geese for meat production. As medium-sized breeds, they are perfect for family gatherings because they have a substantial amount of meat.

The American Buff and Pilgrim geese will add a decent amount of fat in the months leading up to slaughter. This adds to their weight and makes them quite delicious.

Thankfully, Pilgrim and American Buff geese do not need expensive accommodation. A pair of geese can comfortably live in a two-meter square shed. The housing should be predator-proof, more so against foxes and badgers.

If you do not have a pond nearby, you can get a shallow tub with enough water for the geese to submerge themselves when mating or bathing. Most of the diet for Pilgrim and America Buff geese is grass. You should add layer pellets and wheat to your geese’s diets since the nutritional value of grass changes with the seasons.

With the information you have gathered from the above article, you are now ready to choose between an America Buff and Pilgrim goose for your farm or backyard. When buying your bird, be careful to only deal with a reputable hatchery or breeder.

This way, you are assured that you are getting a healthy bird. You can settle for an online hatchery if you do not have a local hatchery you trust. 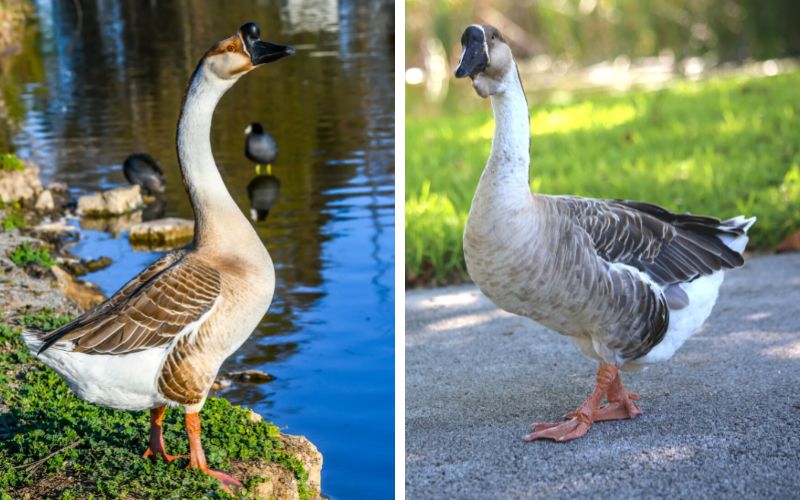 How to Tell if an African Goose is Male or Female? 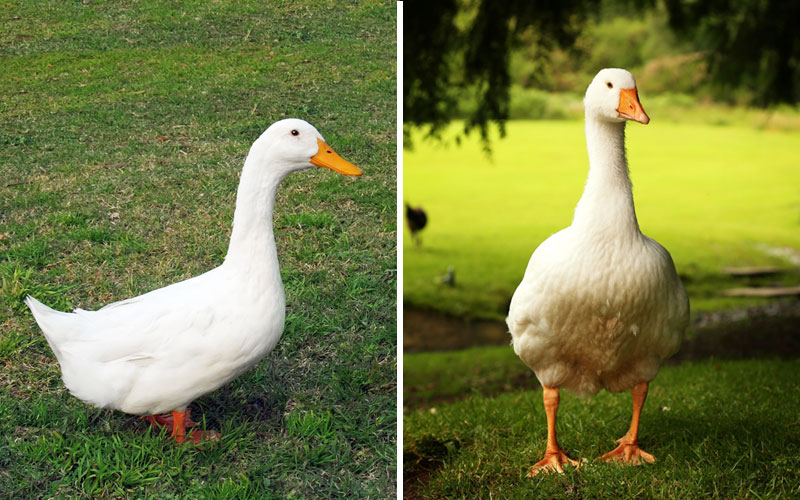