Learn Poultry » Chickens » Why Do My Chickens Randomly Die? 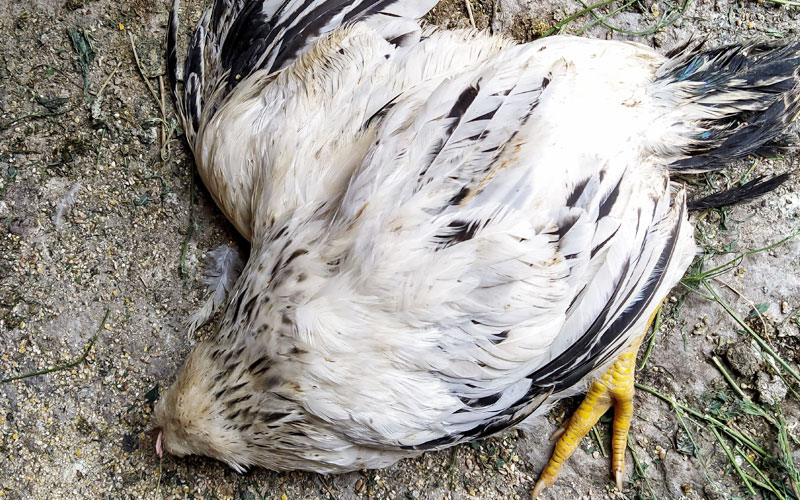 Despite the basic knowledge you may have acquired in the course of raising and handling your backyard chickens, you may not be able to prevent random death. In other words, you may not have a slight idea what really caused a seemingly healthy and active chicken to just drop dead without warning.

If such an incident has ever occurred among your flock of backyard chickens, you may have asked yourself several questions without getting proper answers. However, through extensive and mini-research projects, poultry experts have been able to find the likely causes of random or sudden chicken death syndrome.

Here are some of the reasons why most backyard chickens may randomly die:

Organ failure is by no doubt one of the most common causes of sudden deaths in chickens. This problem is usually identified in fast-growing chicken breeds such as Cornish crosses. Also, broilers may be victims of organ failure due to their fast growth rate.

Typically, a broiler is ready for slaughter at the age of 8 weeks. Beyond that age, these breeds of meat chickens can suffer organ failure including heart attack due to being overweight. Also, their rapid growth can easily lead to overstressing of their most fragile body organs or systems.

As a chicken owner, you may prevent random deaths in your meat chickens by butchering them as soon as they reach 8 weeks old or when you are sure that they are large enough for slaughter.

This is because most overweight birds are likely to be unhealthy just in the same way human beings do. With excess weight, your chickens can suffer from a myriad of health complications that can lead to untimely death.

Apart from butchering your broilers when they attain a certain age and weight, you can just provide enough space for them to roam about. Plenty of space will help them exercise to keep themselves fit and also to lower the chances of overburdening their most vital body organs.

Crop impaction is among the top reasons why chickens may randomly die. This phenomenon is usually brought about by certain types of foods and objects that impact the crop, causing it to swell in the process.

Materials such as dried grass or straw can easily get stuck or tangled in a mess right inside the crop. These materials form something similar to a hairball while inside the crop. As a result, the material fails to move from the crop to the stomach.

An impacted crop can cause a number of symptoms. The common ones include refusal of food, lethargy, and excessive drinking of water. Once you notice these signs, make sure to examine or inspect the affected chicken as soon as possible before things get out of hand.

This is because if impaction is left untreated, it can easily lead to health problems such as pendulous crops, sour crops, and ultimate death since your chicken will not be able to breathe or even eat.

You can prevent incidents of an impacted crop by feeding your birds a lot of grit. You may also help your chickens have access to natural grit by allowing them to free-range in the backyard. Most importantly, pay attention to your chickens for signs of refusal to eat and fatigue to identify cases of the impacted crop before they cause sudden death.

Invisible diseases or parasites are known to cause random death among flocks of chickens. As a matter of fact, this cause of death is most changing to identify because there are no visible signs or symptoms that you can observe.

In most cases, this killer is easily identified during the autopsy of a dead chicken. The autopsy is likely to point out causes such as mites, lice, worms, and other organisms. Coccidiosis is one disease that is associated with the sudden death of chickens. It usually spreads through the chickens’ droppings, particularly inside the coop. Coccidiosis is also common in closely confined coops.

Another common illness that causes sudden deaths in backyard chickens is mycoplasma. Its symptoms include sneezing and inflammation of the eyes. Even though these signs are preventable, they are likely to be missed especially if you have a large flock of birds in your backyard.

The best remedy to invisible illness and parasites is to maintain a clean environment around your chickens. Make sure their living spaces are free of disease-causing organisms by regularly cleaning them.

Just like other animals on the farm, chickens can get easily poisoned. The common cause of poisoning in backyard chickens is different types of food they constantly come across while free-ranging.

Small pieces of plastics and rubber materials or bits of tomato plants can be toxic to your chickens. When they ingest these materials, the toxicity reacts quickly, causing them to display signs of digestive disorders.

This toxicity may also make your birds distressed before they drop dead. Therefore, make sure that all toxic materials and spoiled food are disposed of far away from your chickens.

Egg bound can cause random death in your flock of laying hens. An impaction of eggs between your chickens’ vent and shell gland can lead to sudden death. This is so common in hens that usually lay massive eggs. These big eggs are likely to get stuck at the vent during the laying process.

Unfortunately, preventing your chickens from experiencing egg bound is a little bit difficult. The unfortunate chickens are likely to die while struggling to push the eggs out of their vents. Common causes of this problem include excess weight and calcium deficiency. With that being said, you can prevent egg-bound problems by providing your flock with a healthy and nutritious diet.

Apart from that, make sure there is plenty of room for your birds to roam as part of their exercise routine to avoid becoming overweight. Clean living space should also be a factor to consider when trying to prevent egg-bound occurrence.

Enough nesting boxes can as well help protect your laying hens from experiencing egg-bound problems. Availability of several nesting boxes will undoubtedly avoid cases of your chickens waiting too long to lay eggs.

Chickens can sustain different injuries, especially after a fierce fight between them. Some of these injuries may lead to trauma, which can eventually cause random death in your chickens. This cause of death does not always present any signs of injury or accident on your chickens’ bodies.

More often, injuries happen when your birds have internal damage to their organs due to fighting or accidents. Sometimes your chickens can run into things that can damage their body parts. Some can fall from deadly heights and injure themselves. Larger birds can also squash or trample on smaller birds, causing fatal injuries that lead to sudden death.

There is little you can do about injuries sustained by your chickens. However, you may provide enough space for your birds to move around freely and coexist in harmony. If you are raising free-ranging chickens, ensure that each bird has at least 4 square feet of space. Those inside the coop should have approximately 10 square feet per bird.

As usual, old age contributes to sudden death in chickens. Once they get old, chickens cannot defend themselves against the most aggressive young birds. The old chicken can also not fight for their territory of food and water. If left unchecked, they can starve to death.

Senior chickens may also have scars due to frequent pecking by other flock members. These scars can get infected if not treated on time and cause diseases that may eventually kill them. Lethargy is another sign that your old chicken is about to die. The only thing you can do is to comfort your aging chicken until the last moment.

Quite a number of problems within your backyard flock can contribute to random deaths for some chickens that were previously healthy and active. While there is so little you can do to stop your random deaths among your chickens, maintaining a clean, secure, and spacious coop can greatly improve their health status.

Make sure to provide your feathered friends with plenty of high-quality and nutritious chicken feed. Fresh, clean drinking water is also essential. Most significantly, consult with your local vet to occasionally examine your flock to help detect potential health problems that may possibly lead to random death among some birds.

Observe all these important steps and you will most likely decrease the likelihood of random death of your backyard chickens. 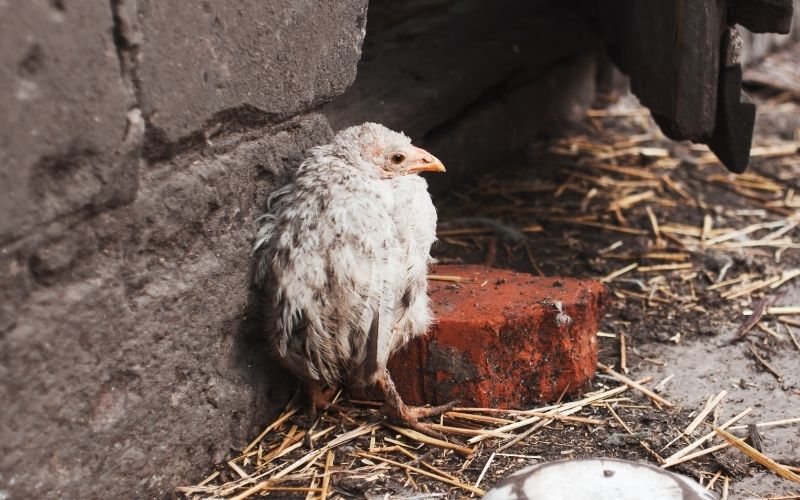 Can Chickens Get Rabies? 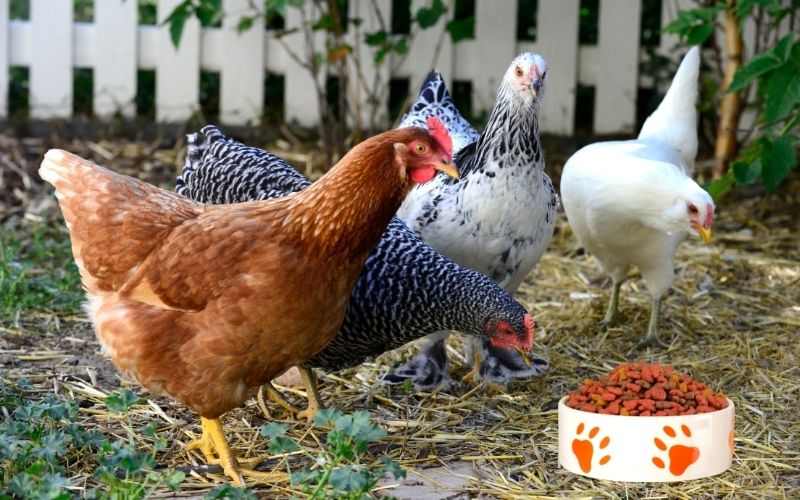 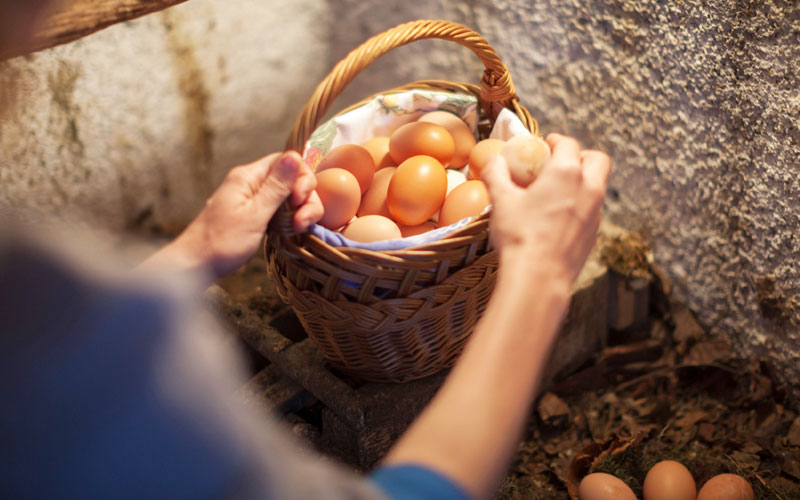 How Often to Collect Your Chicken Eggs? 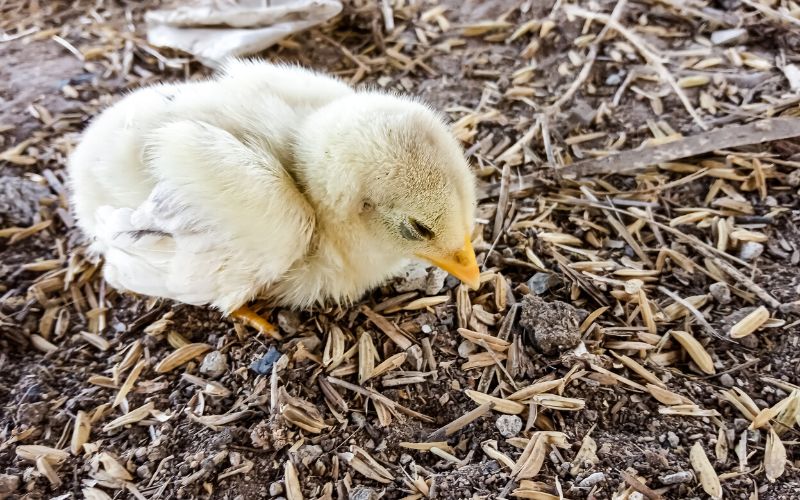 7 Signs a Baby Chick Is Dying