Why Do Quails Attack Each Other?

Every so often I get the same question from new quail farmers. This question is, why are my quails fighting? It is usually an issue of concern as they have no idea what triggers the behavior or how to confront it. 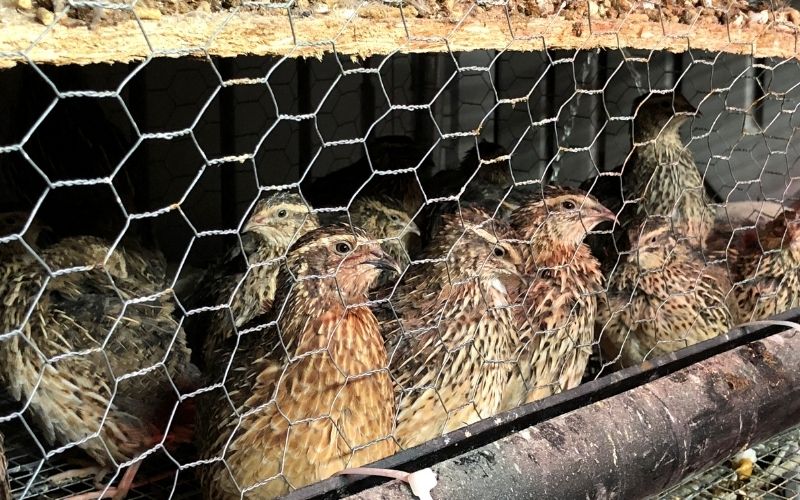 In this piece, I will explain to you 5 common scenarios that might be causing violence in your quail in the hope of shedding some light on the matter. I will also give you some tips on how to prevent your quail from fighting. With these in mind, you should be able to understand the cause of the behavior as well as take the necessary steps to remedy it.

5 Reasons Why Quails Fight Each Other

Quails fight for several reasons, some natural and others not so. Here is a look at some of them in detail.

This is seen among lions and hyenas as well as human beings. Quails also employ the same leadership scenario. Even though the quails are domesticated, their wild instincts remain. If you are to add new quails to an already existing coop, then there will be a need to reaffirm the pecking order to see where the new quail fits in.

This is what triggers the fighting as the new and the old wrestle for dominance. If you are intending to mix new quail in with the old, then the best practice is usually to induce a similar number of new quail to what is already in existence.

That is if the coop has five quail, introduce five more. Introducing a solitary bird makes it an easy target for all the rest and they will continually pick on it for quite a while.

In the breeding season, female quail usually lay eggs while male quail crow a lot. This is most predominant in younger birds as they hit adulthood. Their bodies are flooded with hormones to aid them in mating. This surge in hormones increases their strength and in turn their aggression.

This becomes worse if there are too many males in the cage. The behavior does not last too long as the order is usually established quickly during the early stages of the mating season. If this goes on, then there is a possibility that the ratio within the coop exceeds that of one rooster per five hens and this will keep causing skirmishes among the birds as they fight for mating privileges.

Aggression during the early stages of the breeding season is ok and even encouraged as it ensures that the dominant traits of the strong are passed onto the offspring. It is only a concern if it goes on for too long or the birds get injured to a point of bleeding or losing body parts like eyes.

Space is important among all species, the same goes for quail. You must balance your birds in terms of square feet available to ensure that they can move and live with a sense of freedom. This is very essential for peace in the coop, especially if the quail are raised in the enclosure.

It is advisable to have no more than one bird per square foot. If this space is less, the birds will feel caged in and begin to fight for the limited space to declare their territory. This will result in the weaker birds getting pecked often and isolated to one crumpled-up location in the coop as the others dominate the rest of the space and roam freely.

This is bad as it affects the feeding habits and appetites of the segregated quail and may result in diminished health. Keep it at one square foot per quail and if possible, one and a half square feet. This means that the amount of birds you can keep in a coup is predetermined by the size of the coop despite the size of the quail.

– Lack of Protein in Food

Quail need a balanced diet. Free-range quail do not suffer from the lack of protein in their diet as they can freely fend for themselves. However, quail kept in a coop can suffer from a lack of enough protein.

One way to tell if this is happening is when quail start pulling feathers from each others’ bodies. The diet needs to have at least 30% protein in their diet and any less tends to be problematic.

This results in the quail being uneasy and in most cases, this escalates to violence as they try to remedy this lack of enough protein. Always read the labels of the feed to ensure that it is balanced in terms of nutrients. This will aid in proper nutrition and growth in your quals.

There is always that one bird that is just mean and aggressive for no particular reason. This is usually a solitary bully bird looking to inflict harm on the surrounding quail. Once you detect such a bird in the flock, set it aside from the rest before it can do any more harm.

Do this before the mating season whether the bird is male or female. This is because such traits are hereditary and the next generation of quail from that solitary bird may carry on the aggressive trait. It is usually to use such a bird for meat or sell it to hunters to use to train their dogs.

During the mating season, female quails tend to lose the feathers on the back of their heads. New farmers sometimes interpret this as fighting among the quails but it is not. Even though there is a lot of crowing among the male quail, they are not attacking the females. This is just how quails breed.

During the mating exercise, the males grab the feathers at the back of the female’s head to subdue them and establish balance. Loss of feathers in the back of the head is common at the beginning of the breeding season as the males tend to be overly excited with the surge in hormones.

This is nothing to worry about as it calms down with time. It is only an issue if the females start to bleed as this will incite attacks from other quail.

Can You Keep 2 Male Quails Together?

There is a popular belief among new quail farmers that there can not be more than one male quail per coop. This is a false notion. You can keep 2 male quails in the same coop. In reality, you can keep as many as you want.

There is however a rule of thumb when it comes to mixing male and female quail. This rule of thumb exists to ensure that there is cohesion within the coop for the safety of both the roosters and the hens.

If you are to keep male and female quail together, always ensure that there is one rooster for every five hens. More than this ratio is bad for the rooster as they will attack each other during the mating season to establish dominance.

Less than is also detrimental to the female roosters as they will attack each other to establish the rights to be bred. As you keep this balance, do not forget to maintain at least one square foot per quail to maintain comfort.

Are Quails Aggressive with Each Other?

Quails tend to be aggressive around the breeding season, with the females being the greater aggressors for many reasons. If the female quails are being overbred because of an imbalance in the roosters, they tend to fight back against this phenomenon by picking on the male quail as well as the other female quail.

As quail are omnivorous by nature, they are drawn to blood. This means that if you have a bird in the coop that is injured to the point of bleeding, the other quail will show aggression towards it and keep pecking at the open wound. Such a bird needs to be isolated till it is fully healed before being returned to the common area.

How do You Stop Quails from Fighting?

If you have noticed some violence within the coop, try and investigate the origins of the behavior. Here are a few ways that you can use to remedy the situation and ensure peace among your quail.

If you are unsure of what the cause is, then start implementing the changes one by one every week as you observe behavior change. If it is mating season, give it a week or so before you institute any changes to ensure that the violence is not a result of a change in hormones.

Quail are fairly calm birds as a result of years of domestication. It is however common for them to get aggressive from time to time and attack each other. You must observe them keenly and try to decipher the cause of this behavior change.

Once you come up with an idea of what is causing this, then take the necessary steps to remedy it before it affects the overall well-being of the entire flock. If you are to keep more than one male quail in the same coop, do not forget the rule of thumb to ensure that you maintain balance within the coop.

It is my hope that this article will help you become a better quail farmer and get the most out of your flock. 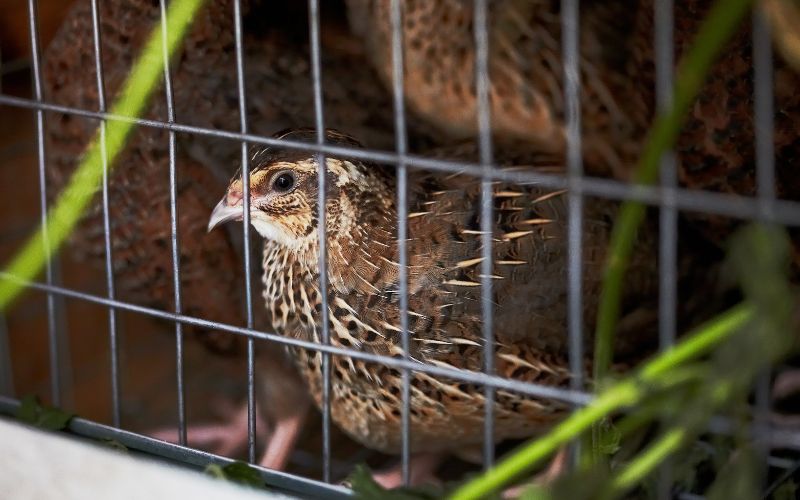 Do Quails Have Salmonella? 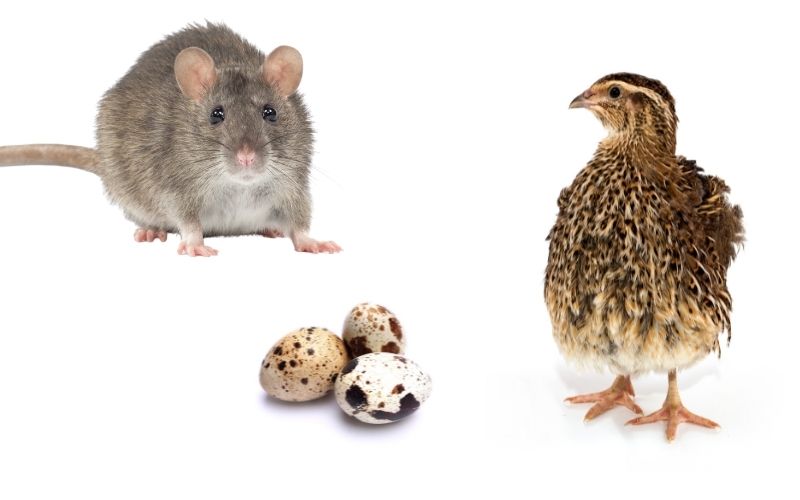 Will Rats Eat Quails and Their Eggs? 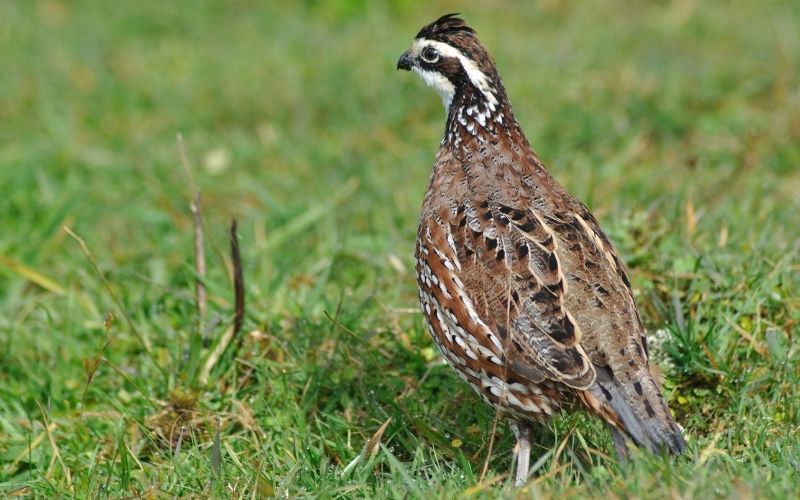 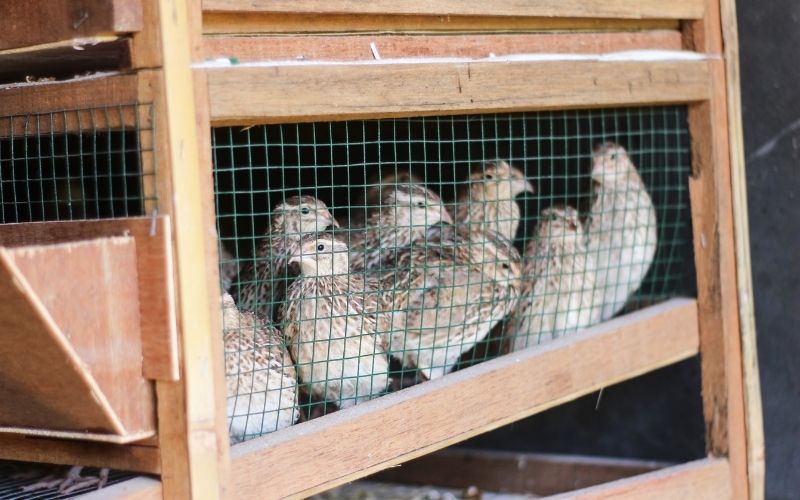 How Many Quails Can You Keep Together?