A thorough understanding of chicken anatomy is essential for knowing and rectifying the problems in your chickens. For instance, understanding how a chicken’s digestive system works can help you understand your bird’s nutritional requirements. 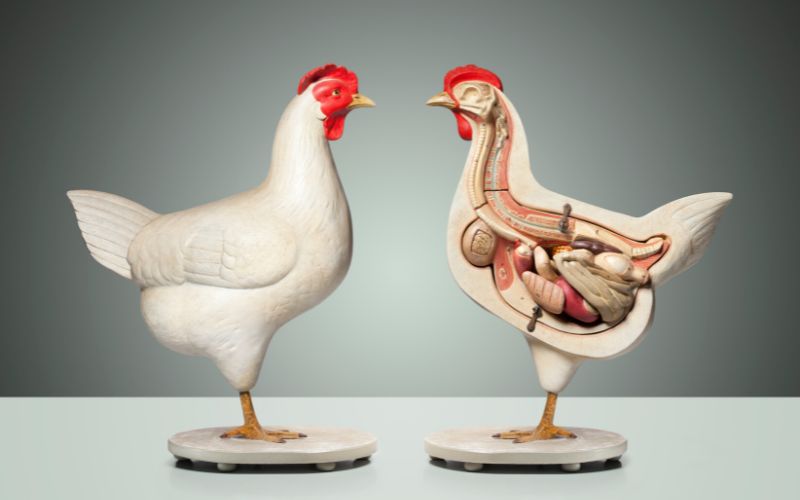 Moreover, knowing your chickens’ digestive systems can help you correct any digestive issues that may arise while raising chickens. Similarly, in-depth knowledge of a hen’s reproductive system is crucial for understanding reproduction problems concerning fertility, hatchability, and egg production. 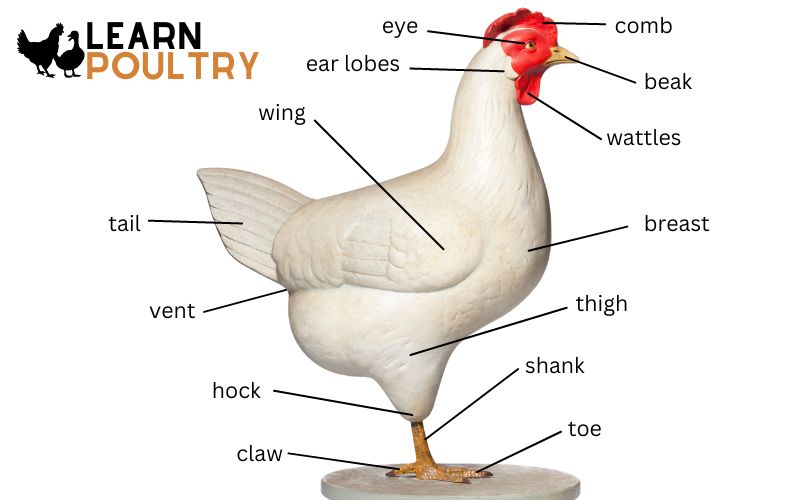 A chicken’s external parts include the beak, comb, ears, wattles, eye rings, eyes, tail, shanks, spurs, toes, and hocks. Both hens and cockerels have all these essential parts. However, the differences between hens’ and roosters’ external anatomy include the size of their combs and wattles, their spurs, and the look of their cape feathers and hackles.

Both cockerels and hens have several flight feathers on their wings. They also have axial feathers that separate their secondary and primary feathers. Chickens’ heads have several parts. The comb is among the most prominent features of a chicken’s head.

The comb is the fleshy part of a chicken’s head. Most chickens have red combs, although the comb can vary depending on the breed. The other prominent features are the wattles, the two fleshy skins hanging below a chicken’s beak. Unlike humans, chickens don’t have external ears.

Every chicken has a beak comprising the lower and upper beaks. Chickens have two eyes on each side of their heads. A chicken’s breast is the plump, broad part at the front of the bird. Roosters have bigger breasts than females.

All chickens have two wings on each side of their bodies. All chickens, whether hens or roosters, have tail feathers. These feathers are on a chicken’s caudal or posterior part. Unlike other feathers in a chicken, these feathers point upwards.

The cloaca is also another significant part of a chicken’s external anatomy. It is simply the chicken’s anus or an opening that chickens use to pass out their droppings or lay eggs. Chickens have a different number of toes.

Some breeds, like Silkie bantams, have five toes, while most standard breeds have four. Thus, the number of the toes can vary depending on the breed. Roosters have larger toes than females. 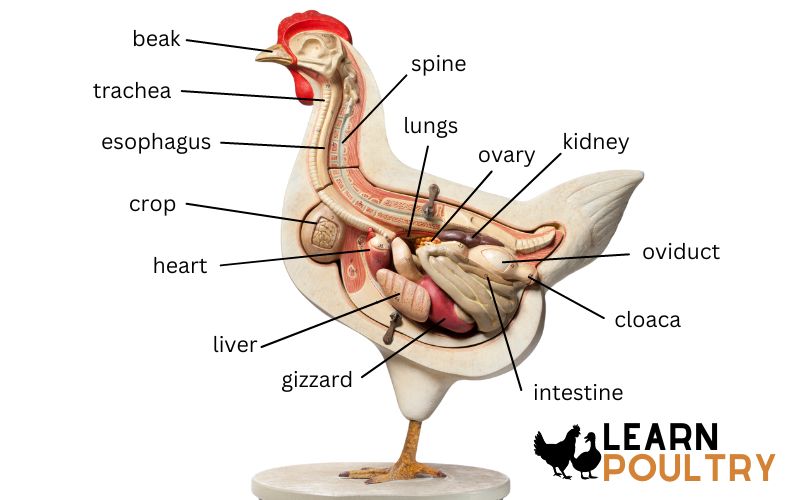 Most of these skeletal differences between a chicken and other mammals relate to a chicken’s need to be lightweight enough to fly and maintain body support. A chicken’s skeleton also includes many unique features. For instance, the avian skeleton includes many vertebral sections to provide the chicken with the rigidity it needs for flight and movement.

A chicken’s skull is smaller than the skulls of other animals because chickens don’t need to have a large head. Having a large head will make movements in chickens impossible. Roosters have bigger skulls than hens because their heads are larger than females in all chicken breeds.

A chicken’s skeletal system also has a large neck that serves as a natural absorber, ultimately protecting the chicken’s delicate brain tissues when a bird is walking or flying. Hens have shorter necks than roosters because they have smaller skeletons than roosters.

Medullary bones are more vital in hens than roosters because they are a crucial calcium source, especially in egg-laying hens. A hen’s medullary bones can synthesize around 47% calcium, helping the bird make eggshells.

A chicken’s digestive system starts at the beak (mouth) of roosters and hens. The foods that your chickens eat enter their digestive systems through the mouth. Because chickens lack teeth, it means they can’t chew their food.

Nonetheless, their mouths have many saliva glands that secrete plenty of saliva, making the food wet and easy for the chickens to swallow. The saliva also contains crucial enzymes like amylase, which starts a chicken’s digestion process.

Roosters and hens have tongues in their mouths that push the food to the back of their mouths in readiness to swallow. Roosters have bigger tongues than hens because they have larger mouths that can accommodate more food.

A chicken’s crop is an extension of the esophagus and sits outside the bird’s body cavity in its neck region. Chickens store food in their crops after swallowing it through their mouths. The undigested food will remain in the crop until it passes to a chicken’s digestive tract.

The cloaca is the equivalent of the rectum in a chicken’s body. The digestive waste in a chicken mixes with urates or wastes from a chicken’s urinary system. Hens rely on their cloaca to pass out their eggs while laying.

The respiratory system is also a vital part of a chicken’s anatomy. Birds, including chickens, don’t breathe like other mammals. Chickens, whether roosters or hens, have two lungs. A trachea or windpipe is the part connecting the two lungs in a chicken. A chicken’s respiratory system starts at the nostrils or the nasal openings.

Chickens use their nostrils to breathe in oxygen and expelling carbon dioxide. Chickens’ nostrils are on the top of their beaks. There are other crucial parts of a chicken’s respiratory system in the head region.

For instance, hens and roosters have pharyngeal and nasal cavities. A chicken’s respiratory system also consists of the cranial larynx. This part is in the pharyngeal region. It is the opening that directs air to a chicken’s windpipe.

A chicken’s larynx is open to allow for air passage into a chicken’s lungs. However, it closes when a chicken is swallowing food down its throat, so the food doesn’t enter the respiratory system but goes down to the digestive system. The air proceeds to the trachea once a chicken breathes in the air. A chicken’s trachea comprises cartilaginous rings.

These rings keep the trachea from collapsing because of the pressure a chicken exerts on its respiratory system when breathing. The trachea has narrower tubes known as bronchi. Some respiratory diseases in chickens cause the formation of tracheal plugs in a chicken’s respiratory tract, especially around the bronchi, thus suffocating the chicken to death.

There are many bronchi in a chicken respiratory tract. Every bronchus (singular bronchi) enters the chicken lung at specific areas. Chickens have relatively smaller lungs than other mammals.

The ribs hold the lungs, preventing them from collapsing and protecting them from negative pressure from external factors. Chicken lungs don’t expand, so chickens and other birds don’t have fully developed diaphragms and chest muscles.

Lungs contain several bronchi that direct to tiny sacs known as alveoli. Chicken lungs have continuous tubes known as parabronchi. These tubes allow the air to go through the lungs in one direction.

Parabronchi have blood capillaries, where gas exchange takes place. The air sacs in a chicken’s respiratory system are balloon-like structures at the ends of a chicken’s airway system.

Roosters’ main sexual organ is the papilla, the equivalent of a penis in humans and other mammals. This organ looks like a tiny bump and can differ in size between one rooster and the other. Males pass their sperm from the papilla to the hens through the cloaca. The cloaca then directs the sperm to the hen’s ovaries through the reproductive tract.

The right ovary in a hen continues to regress as the hen age. Furthermore, the right ovary in hens and other females is nonfunctional. Hens can’t lay if their left ovaries are damaged or have infections.

A hen’s left ovary becomes functional after a pullet is old enough to start laying. The left ovary can only release a single egg daily, so hens don’t lay twice a day. The yolk (ovum) enters the oviduct when ovulation occurs in a hen. The oviduct is a narrow tube measuring between 25 and 27 inches.

The yolk can stay in the oviduct for approximately three hours, during which thick albumen, otherwise known as egg white, forms. The hen then releases the egg from its oviduct through the reproductive tract and finally to the cloaca. The size of the eggs your hens lay will depend on the amount of ovum the bird will release during ovulation.

Chickens have interesting anatomy compared to mammals. Although understanding the anatomy of these birds can be complex, particularly for those with scanty details on avian anatomy, it is helpful to understand the entire chicken anatomy while raising your chickens.

A thorough understanding of your bird’s anatomy will help you understand its overall health and correct things that could make your chicken sick. 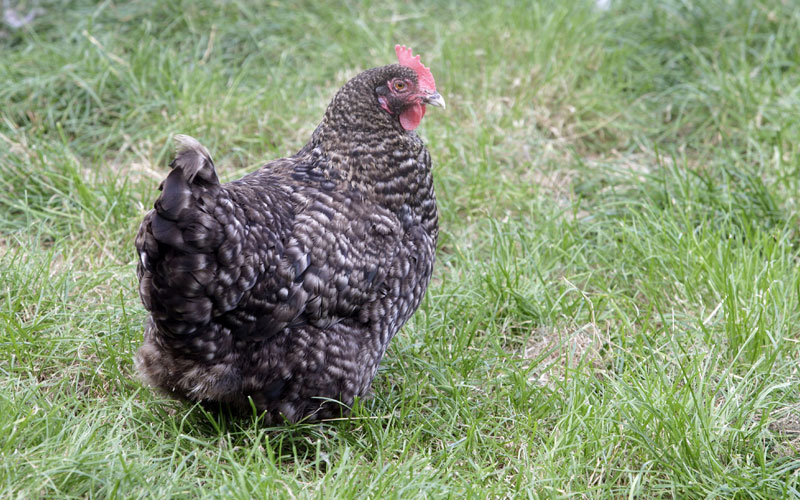 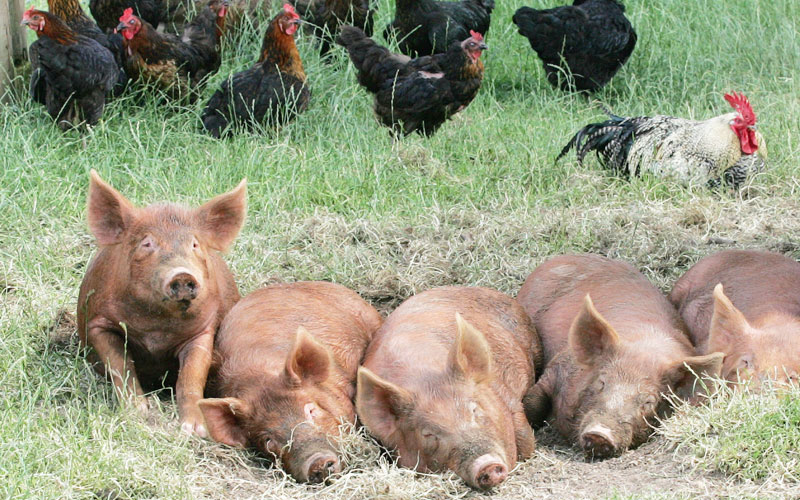 Can Chickens and Pigs Live Together? 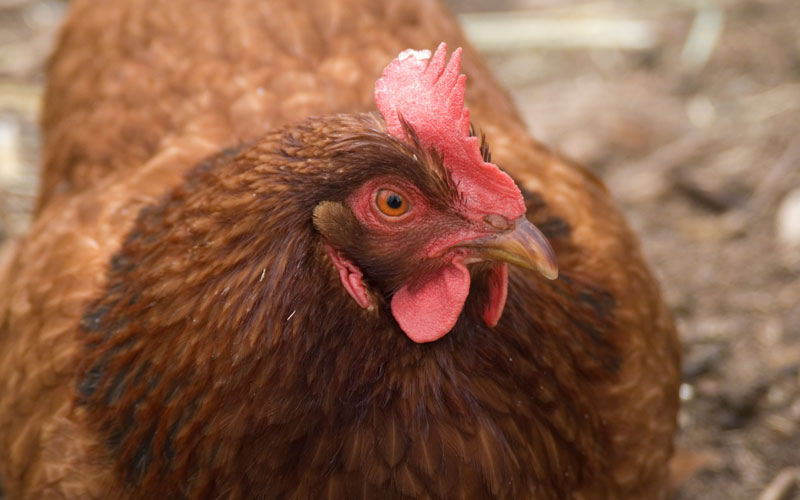 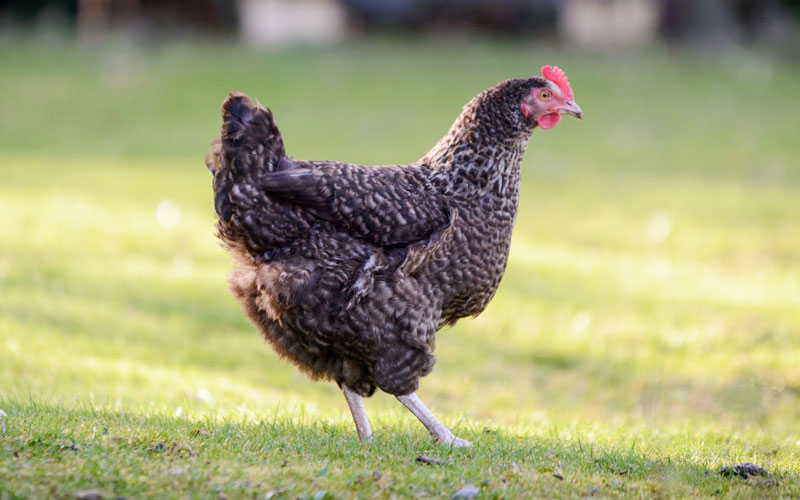